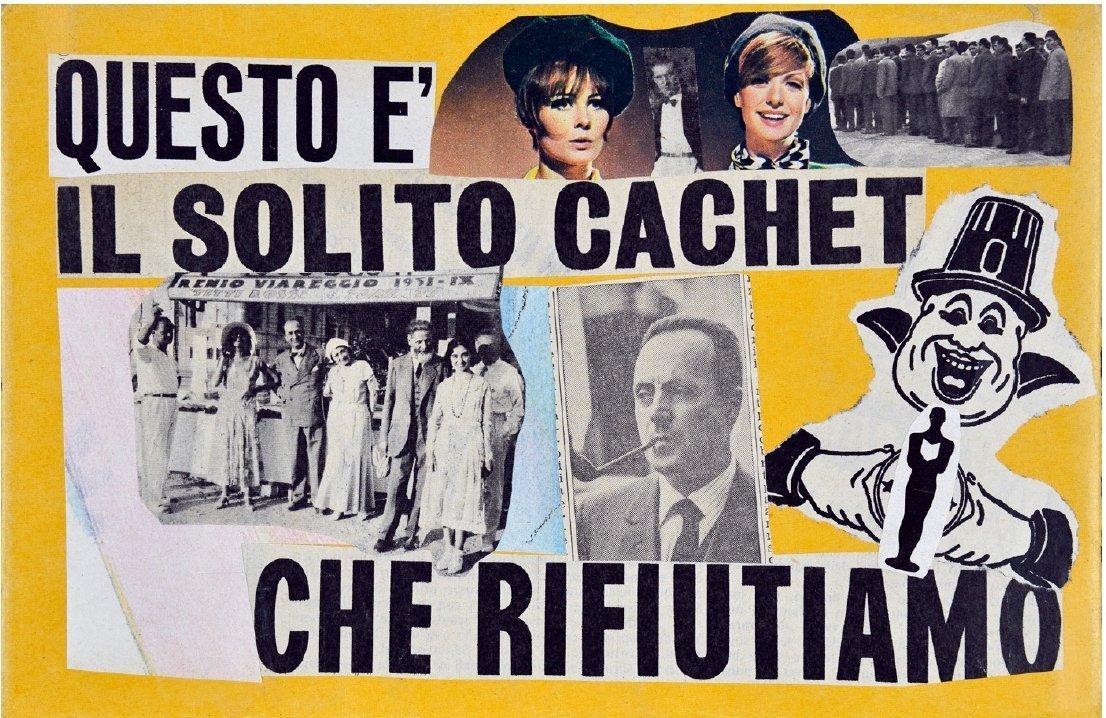 Posted at 10:08h in News by Galleria Clivio
Share

On Sunday 13 October, as part of SUNDAY OF PAPER, the extraordinary opening of MIBACT dedicated to archives and state libraries, at 6 pm the monumental hall of the Biblioteca Marucelliana will host the opening of the exhibition dedicated to Lamberto Pignotti, ABBIAMO FATTO COSE DA PAZZI. LAMBERTO PIGNOTTI E LA MARUCELLIANA, curated by Giovanna Lambroni and Lucilla Saccà.
The event offers a selection of documents from the Pignotti collection of the Biblioteca Marucelliana, which collects papers and publications largely related to the early years of the artist’s long career: typescripts, manuscripts, extracts from newspapers and issues of magazines, posters, playbills, brochures and leaflets related to the historical conferences in Florence and events organized by Gruppo 70, books and a selection of works of the sixties and seventies. On display are collages of Visual Poetry from the early 1960s and a selection of the subsequent series of Stamps and Souvenirs. In Florence in 1963, Pignotti was one of the founders of Gruppo 70, where he theorized for poetry and art the need for a new technological language and participated in all the meetings of the emerging Gruppo 63. Among the many awards he has received are the Premio Città di Firenze, chaired by Mario Luzi (1958), the Premio Cino Del Duca, chaired by Eugenio Montale (1961), the Premio Nazionale Alte Ceccato (1965); in 1987 he won the Premio Acquasparta for Art Criticism and in the same year the Premio della Cultura (Culture Prize) organised by the Presidenza del Consiglio dei Ministri. More recently he won the International Capalbio Award (2015), the Alessandro Tassoni “Honoris causa” (Modena 2017) and the EXTRA Award (Paris 2018), at the Centre Pompidou. He has been invited several times to the Venice Biennale, to Documenta 5 (Kassel 1972) and to the XI Quadriennale di Roma (1986). His works and documentation can be found at MAXXI and GNAM (Rome), at MART (Rovereto), at CSAC (Parma), at Centre Pompidou (Paris), at Fondazioni Morra (Naples), Bonotto (Vicenza) and Berardelli (Brescia), in the Gallerie d’Italia collection (Intesa San Paolo, Milan), but also in the national central libraries of Rome and Florence and at Beinecke Library of Yale University (New Haven, Connecticut).

Luca Bellingeri, director of the Biblioteca Marucelliana, Lamberto Pignotti and the curators of the exhibition, Giovanna Lambroni and Lucilla Saccà, will be present.
Renato Barilli, Marco Meneguzzo and Stefania Stefanelli will take the floor.
The exhibition was organized with the contribution of the Ambron Castiglioni Foundation and Angelo Pontecorboli Editore.